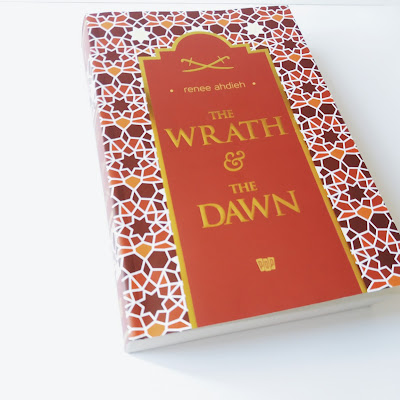 This book is a proof that you should “never judge a book by its cover”. I am a typical of a reader that always see the cover first and the synopsis next, and when I see this cover, to be honest I don’t really like it in the first time. I purchase this book by bought a special box full of some books’ stuff. I’m being curious and purchased it, and after waiting for a long time I finally got the box. First time I open the box I already disappointed with the other stuff (well, just a little bit, but still happy when I got those books’ stuff), and it increased when I saw the book. I don’t really know the title also the author and become a little bit skeptic about the seller choice of the book in this ‘secret box’. I thought she is some random author with the below-3-stars-rating-book. Also when I read the synopsis in the back of the book it feels not so……attractive…..but then I guess I am wrong. When I open the Goodreads page, and I become curious about the entire story.

The Wrath & The Dawn tells about a girl name Shahrzad –it’s easier to tells her as Shazi, just like her friend called her, and the boy king Khalid. Khalid known as a murderous boy-king who always married to a girl and take the bride only to have a silk cord wrapped around her throat –precisely same as Goodreads synopsis hahaha, pardon me. Khalid last victim was Shazi’s best friend, Shiva. Shazi promised to have a revenge for what Khalid did to Shiva, she volunteered and planned everything. She was saved for the first night thanks to her version of “A Thousand and One Nights“. Every night Shazi was doing her best to saved her own life, and in the same time try to revenge her husband. Nights to nights they were together, Shazi unconsciously falling in love with Khalid, because she never found her husband’s monster and murderous side, yet she found a lonely man, with some mysterious past, who never want to take his brides’ life. Khalid mysterious side really attract me, to know him more, or even falling in love with him. I curious about their next story.
I really love the story. I imagine Shazi would be a weak girl, the one who always have some fear for the men, what I expect to a girl from Middle East that time. Once again, I am totally wrong. Shazi is an independent girl, who really like to try learn archery –and did it well, also so strong, never show her fear, and stand high even though she is alone in the castle. What the other I really like about this book is the love story, the drama part, the romance side, never feels too much. It wrote in the exact amount and make the whole story looks so perfect. Khalid who falling in love but never show it much, Shazi who so bold and brave also when she needs to show her love to Khalid, to make him know that he never be alone and has Shazi in her side. The thing I don’t really understand is about Shazi’s father part. When he ‘played’ with magic and found something so mysterious…I don’t really understand. Maybe it would be tells more in the second book –it already pusblished in March 2016, but I still waiting for the Bahasa version, because I have a feeling that this book’s English is not too light and simple to understand.
As I told before in the other book review that I really liked when a book can teach me something, a new thing, or just emphasize the points I already know. This book told us that judge someone from your point of view is so wrong, s/he always has their own reason to do that. You should know her/him better before know you are wrong or right. You can accompany someone to heal their wound, their loneliness, their scar. Everyone have that superpower, to help other, to love other, and to change the other people into someone better. I also realize that hate someone and love someone just separated by a thin wall, you cross it once and can not ever cross it back.
Overall, I will gave this book 4 stars out of 5. I absolutely will purchased the next book, and I am trying to get the other short story about Shazi and Khalid that published by the author between the first and second book. Here my favorite quotes of this book:
“My soul sees its equal in you.”
“Some things exist in our lives for but a brief moment. And we must let them go on to light another sky.”
“You have a beautiful laugh. Like the promise of tomorrow.”
“There is no one I would rather see the sunrise with than you.”
“Love is a force unto itself, sayyidi. For love, people consider the unthinkable…and often achieve the impossible. I would not sneer at its power.”
“The more a person pushes others away, the clearer it becomes he is in need of love the most.”
“People fall in and out of love with the rising and setting of the sun. Rather like a boy who loves the color green one day, only to discover on the morrow that he truly prefers blue.”